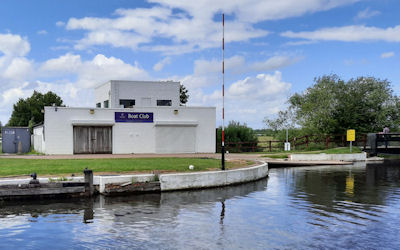 Wycliffe College is an independent private school in Stonehouse, Gloucestershire.
The College has a Boat House at Saul Junction. In 1943 Wycliffe College Boat House was requisitioned by the Royal Air Force as a World War II maintenance facility for highspeed motor launches. The vessels were used in Air Sea Rescue and Flying Boat Operations. The high-speed boats were moored under trees along the Stroudwater Arm. The Company of Proprietors of the Stroudwater Navigation charged mooring fees of one shilling a week per boat. RAF Sergeant Eric Blackman was in charge. The RAF closed and vacated the site on Friday 1 December 1944.

Eric wrote a book entitled Airman at the Helm.  A short section of the book describes life in Saul for RAF personnel in the 1940s. Jolly times were had it seems! Whilst the book is out of print a small number are available on Amazon.
Click here to purchase a copy
Alternatively, click here to download an extract written by Eric Blackman in 2003 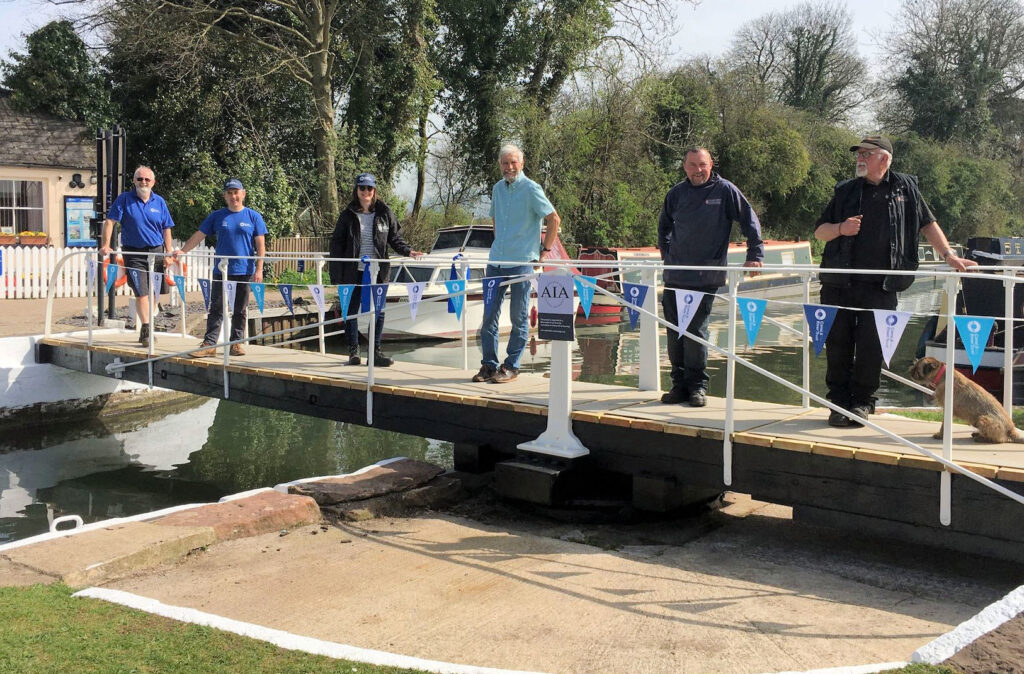 The Stroudwater Pedestrian Swing Bridge, originating from the 1800s, was refurbished in 2021. Canal & River Trust contracted the restoration work to RW Davis Ship and Boat Builders, at Saul Junction.
Funding was provided by The Association for Industrial Archaeology’s Small Grants Scheme. The historic timber structure had deteriorated in recent years. Since the opening of Saul Marina, the bridge has been left open – in what is known as the ‘off position‘ thereby allowing the passage of the increased boat traffic.
To celebrate its restoration the bridge was swung briefly into the ‘on position‘, to allow pedestrian access for this photo opportunity.
The personnel on the bridge are, from left to right, Christopher Kirkham – Bridge Keeper, Morgan Cowles – CRT Heritage & Environment Manager, Gillian Harrison – CRT Press Liaison Officer, David Viner – CRT Heritage & Environment Manager (Retired September 2020), Craig Glassonbury – RWD Shipyard Manager and RWD proprietor Phil Trotter and his dog ‘Rollo’.
Click here to view Morgan Cowles’ 24-page Record of Photos & Refurbishment

The Stroudwater Navigation opened in 1779 and climbed through thirteen locks from the River Severn at Framilode to a terminus basin at Wallbridge in Stroud. This painting of Wallbridge Wharf shows the terminus of the Stroudwater on the right and the first lock on the Thames & Severn Canal on the left.   The scene was painted in 1931 by schoolboy John Cook, aged just 15yrs. On leaving Central School Stroud in 1932, John was employed as a sign painter at Stroud Brewery. The tall chimney locates that brewery. (Photo of painting courtesy of Neil Herapath)

James Smart of Chalford
This book, written by local historian and author Hugh Conway-Jones is the story of coal merchant and carrier 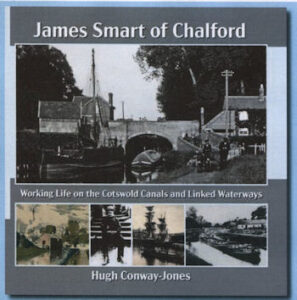 James Smart of Chalford and his associates in the 1880s and 1890s. Regularly using the Stroudwater and Thames & Severn canals, Smart’s narrowboats also traded up the River Severn to the Midlands and over the Cotswolds to the Thames Valley and Wiltshire, whilst his barges traded down the Severn and around the upper Bristol Channel. The story is based on over one thousand surviving letters, postcards and telegrams written to James Smart by his employees, his suppliers and his customers, and these have been linked up with related voyages recorded in the tonnage books of the relevant canals. The story gives a wonderful insight into the lives of Victorian barge and boatmen and shows how James Smart coped with managing his far-flung business in the days before the telephone.
Click on the image to purchase the book from the Cotswold Canals Trust online shop.

Click on the icon below to find out even more about the history of The Stroudwater Navigation.

Farson Digital Watercams are installed at three points
on the Stroudwater Navigation.
Click on the links below to view restoration projects already completed.